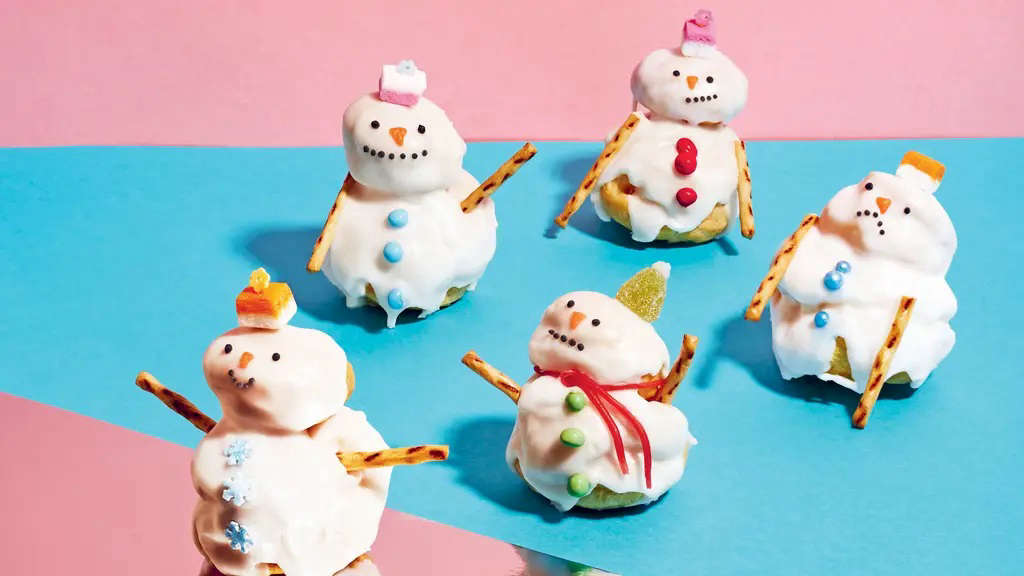 Bring some festive joy to your baking with these snowmen made out of choux pastry.

Kim-Joy says all the recipes in her Christmas book are “my babies”, but this recipe for Irish cream snowmen choux has a special place in her heart.

“I like how they look like they’re running in the photographs,” she says. “They’ve got a lot of character in their faces.

“I also like them because they’re something you can be a little bit messy with,” Kim-Joy adds. “Because it’s a snowman, it doesn’t really matter too much, because snowmen are kind of messy. It lets you be a bit more creative with it, so I feel like it’s accessible to people who are new to baking.”

For the royal icing:
20g egg white (substitute with aquafaba for a vegan version)
112g icing sugar
Plus extra egg white (or aquafaba) and icing sugar to adjust and get the right consistency

2. To make the choux pastry, chop the butter and add it to a small saucepan with the water and salt. Heat until the butter has melted and the mixture is starting to bubble. Meanwhile, combine both flours (or gluten-free flour plus xanthan gum) in a separate bowl. When the butter mixture is bubbling, remove it from the heat and add the flours all in one go. Stir with a wooden spoon until it forms a smooth ball that pulls away from the sides very easily – this is called a panada.

3. Transfer the panada to a stand mixer fitted with a paddle attachment (or use a handheld electric whisk) and leave to cool for five to 10 minutes.

4. Add two eggs, one at a time, to the panada, mixing on slow speed after each addition until combined. Whisk a third egg in a separate bowl and gradually add one tablespoon at a time, mixing well after each addition. You may not need to add the third egg, or you may need to add a little or all of it. It’s important to add it gradually to avoid having a batter that is too runny. You are looking for a glossy consistency, which leaves a ‘v’ when a spoon is lifted out of the dough.

5. Transfer to a piping bag and cut a medium tip. Line two baking sheets with baking paper or a silicone mat, then pipe 20 x 3cm circles onto one of the baking sheets.

6. Bake in the oven for 10 minutes, then turn the oven down to 180°C and bake for a further 20 minutes. Don’t open the oven until at least 25 minutes have passed, to avoid the choux pastry deflating.

7. Meanwhile, pipe a second batch onto the other baking sheet. This time you will need 20 x 2.5cm circles (there will be some leftover choux so you can pipe extra if you like).

8. When the first batch of choux have finished baking, immediately turn them over and use a knife to pierce the base. This is so that the air inside has somewhere to escape, and also gives you a place to pipe in the filling. Bake the second batch of choux for 10 minutes at 200°C, then a further 10 minutes at 180°C.

9. Meanwhile, make the Irish cream filling. Add all the ingredients to a clean, grease-free bowl and whip on medium-high speed until stiff enough to pipe and hold its shape. Don’t overwhip. Transfer the whipped cream to a piping bag and cut a small tip.

10. Pipe the cream into the cooled choux buns through the hole created earlier, making sure each one is filled completely.

11. To make the vanilla icing, whisk all the ingredients together in a bowl, then spoon the icing over the top of each choux bun. Stack the smaller choux bun on top of the larger one.

12. Decorate with Matchstick cookie arms and sprinkles for buttons. These will stick if you add them before the icing sets but use a little extra if needed.

13. For the facial features, making royal icing. Use a stand mixer (or handheld electric whisk) fitted with a balloon whisk attachment to combine the egg white/aquafaba and icing sugar until you get a smooth consistency. Then add tiny amounts of extra egg white (or aquafaba) and/or icing sugar to get the right consistency. Add black and orange dye for the facial features, or use sprinkles. You can also use nuts, fondant or fruits to create accessories for their heads.

Christmas With Kim-Joy: A Festive Collection Of Edible Cuteness by Kim-Joy is published by Quadrille, priced £15. Photography by Ellis Parrinder. Available now