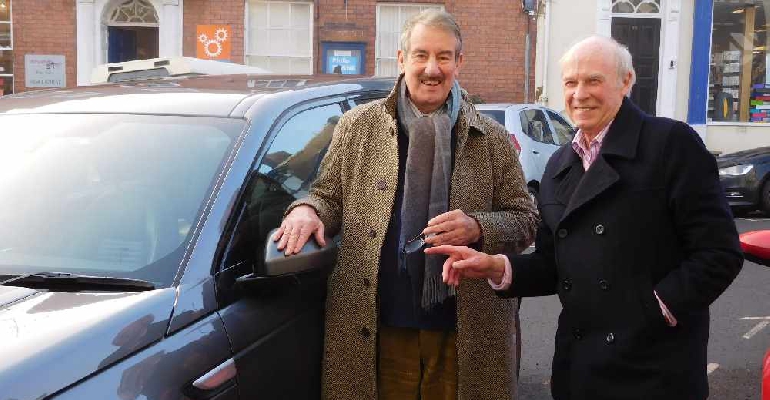 John Hannam recalls one cold January day, when he interviewed John 'Boycie' Challis — that notorious second-hand car dealer from Only Fools and Horses.

I decided to leave my car at home and let the train take the strain. In the end, I think even one of his dodgy motors would have got me there and back much quicker. My horrendous journey ended up a 15 hour round trip. The train was cold, late, over-crowded, had no drinks trolley and, due to a fault, it was finally pulled out of service at Bristol. Eventually I arrived an hour late at Ludlow.

I was so relieved to see John Challis waiting for me outside the station ready to rush me off in his posh Land Rover, obviously not bought from Aubrey Boyce, to join him and his lovely wife, Carol, for lunch at the local Cicchetti deli bar. They love John in that Green Green Grass setting and the proprietors even opened up their nearby Angel restaurant for us to use as a recording studio. That’s fame for you.

John’s first television break came in 1967 when he played Harry Kapper in The Newcomers. He learnt such a lot from that series. I managed to surprise him by mentioning Crossroads. He had no record of it but he’d played the dodgy photographer, Jim Wright, in nine episodes back in 1971.
Initially, he was almost typecast as a copper.

“Well I was so tall and good looking,” suggested John. His policeman credits included Mr Rose, Softly Softly, Z Cars, Coronation Street, Bloomers, Law Centre, In Sickness and In Health, Roland Rat and Ratman. It was just as well. Playing one in Citizen Smith changed his life for ever.

“I was at the National Theatre at the time trying to be a proper actor and apparently John Sullivan spotted me on television in Citizen Smith, playing a policeman with a curious way of talking. He phoned to say he liked the voice and would get back in touch. A year later he did and offered me a one-off part in Only Fools and Horses — and would I speak in the same voice.”

John only had the one scene in that first series and it was not even expected to go to a second. How times quickly changed and it has become one of the world’s most popular series ever. Every minute of the day it’s being screened somewhere on the planet.

Sue Holderness, who played Marlene, was only booked for one appearance. She was suddenly offered more and their superb on-screen chemistry had such an impact on the show. That eventually led to their very successful spin-off series The Green Green Grass. That all came about because John and Carol had moved to an old manor house in Herefordshire. John Sullivan, the writer of Only Fools and Horses, was invited to a party at their huge mansion and saw John in a different light and suddenly had the idea for The Green Green Grass. That ran for four years.

John was invited to Belgrade in Serbia to appear in their top TV chat show and was recognised in the street and virtually mobbed. Only Fools and Horses is also a favourite in Bosnia and Montenegro.

In more recent years, John has played Monty Staines in Benidorm, in which he married Joyce Temple-Savage, played by Sherrie Hewson. He quipped: “Talk about high maintenance!” I assume he meant Joyce and not Sherrie!

Meeting Carol back in 1994 was a life changing event. He’d gone through three failed marriages and some very stressful episodes in his personal life. “I feel very pleased that it happened so late, after so much that had gone on. I ended up meeting the person I should have met a long time ago,” said John.

I love happy endings and they celebrate their silver wedding this year. John has certainly made his mark. The two volumes of his autobiography, Being Boycie and Boycie and Beyond, have been best sellers and written from the heart with warts and all. He’s now writing novels.

What a career he’s had. He’s permanently revered by Dr Who fans for his six-episode appearance as Scorby in The Seeds of Doom, with Tom Baker. He’s been seen in Wish Me Luck, Last of the Summer Wine, Open All Hours and even as Henry Witham-Smythe in Sooty.

It was then time to rush me back to the station. We passed a second hand car forecourt and I smiled to myself. I asked him if he had a part-time job there. In that very famous Boycie voice he replied: “I know nothing about cars.” Quite a few had found that out back in Peckham!