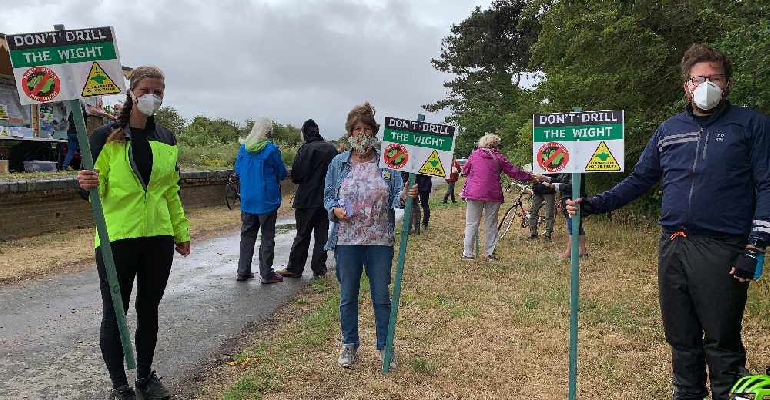 As the deadline for comments on the controversial oil application for Arreton draws nearer, key Isle of Wight figures are adding their voices to the debate — including from the Area of Outstanding Natural Beauty (AONB) committee on behalf of the Biosphere.

The Isle of Wight was awarded UNESCO Biosphere Reserve status in June last year, due its environmental significance.

Objectors to the exploratory oil application fear it would jeopardise the Biosphere status.

UK Oil and Gas has submitted an application for two exploratory boreholes off the A3056, the main road running from Newport to Sandown through Arreton, along with a track and security compound.

The application, if given permission, would see the oil company drill to find out if there are any hydrocarbons under the area.

If it proves viable, the company would then submit another application to get permission to extract the oil in a production line.

However, along with the MP Bob Seely, Island Roads and Isle of Wight councillors, the AONB steering committee has had its say on behalf of the Biosphere, for which it provides day-to-day management.

Chair of the steering committee, Jonathan Bacon, said the proposals clearly ran counter to the Biosphere ethos, and he had been able to get the Isle of Wight Council to recognise its importance following a public question at a meeting of the full council.

“The administration recognises the importance of the UNESCO Biosphere to the Isle of Wight. The Biosphere principles will continue to influence our plans and strategies as we move forward, and our commitment to such principles will come to the fore in our emerging Climate and Environment Strategy.”

“My submission notes the Island’s planning policies have been accepted by UNESCO as supporting the aims of the Biosphere. This application clearly runs counter to these aims as it proposes pollution, traffic chaos and environmental damage..

“Further, it is a key feature of the Biosphere that it recognises and promotes sustainability. The application further runs counter to the Biosphere by supporting processes and an energy source proposed that are the absolute antithesis of supporting a sustainable environment.”

In the formal objection, Mr Bacon says the proposed plans would affect sustainability, the Island’s green infrastructure and cause ‘unacceptable pollution’.

“To become a UNESCO Biosphere Reserve, a region needs to show that people and the natural environment are coexisting harmoniously.

“The intimate and fragmented nature of Isle of Wight AONB, the complexity of its landscapes and diversity of their character, makes the area sensitive to change and reduces its ability to accommodate large scale development.

“Failure to adhere to the principles and commitments which led to the award of Biosphere status place will obviously that status at risk. The application plainly runs counter to key parts of the Island Plan and, as such, cannot be supported if Biosphere status is valued and is sought to be maintained.”

The full objection, and many other comments, can be read through the council’s planning portal, searching application 20/00513/FUL.

Comments can be made until Friday, July 24.