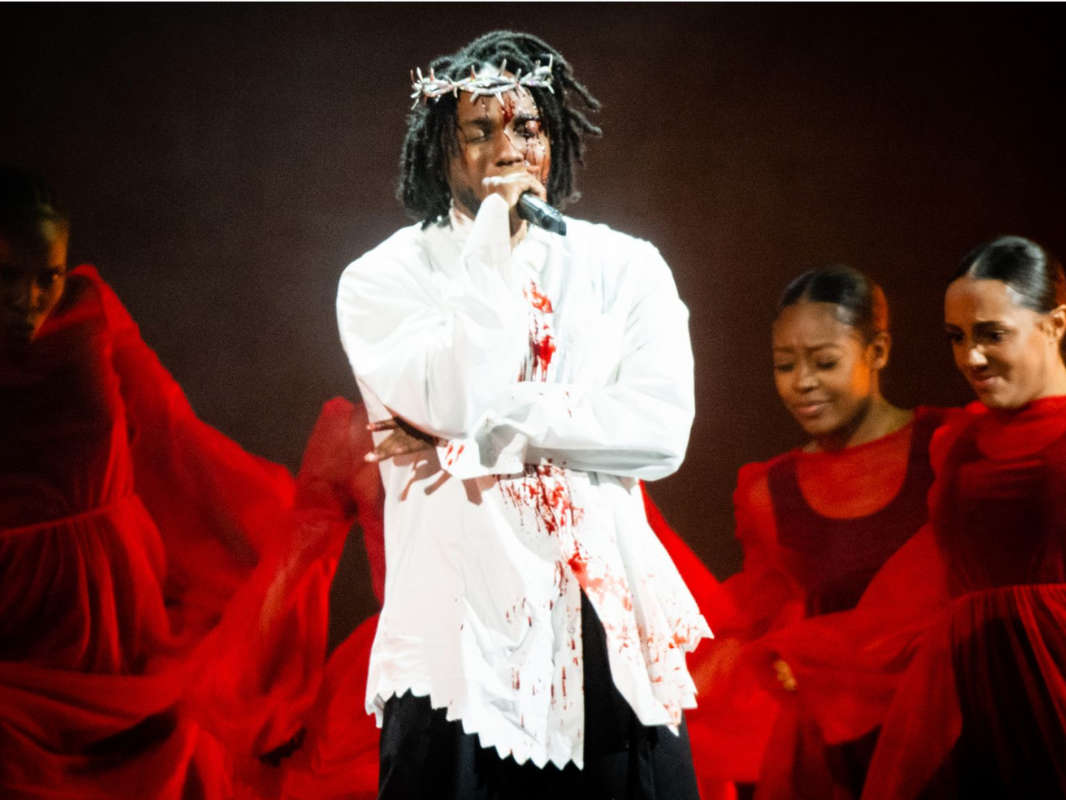 Glastonbury closed with rapper Kendrick Lamar making a dramatic statement apparently referencing the US Supreme Court ruling on abortion, wearing a crown of thorns as fake blood poured from his face.

The festival's final headline set ended with him chanting "Godspeed for women's rights" repeatedly before he dramatically exited the main Pyramid Stage.

The Pulitzer Prize-winning artist made sure his first appearance at the festival would be remembered with many of the songs from his back catalogue accompanied by a visually striking display of dance.

But, as it reached its conclusion during a performance of his new song Saviour, red liquid began to drip from the crown, covering his white shirt with fake blood.

Lamar is known to be a Christian and indicated before his final track began that the crown of thorns represented Christ.

"I wear this crown. They judged Christ. They judge you, they judge Christ," he said, before launching into the number.

The crown was reportedly made by Tiffany and Co and features 8,000 diamonds, according to British Vogue.

He continued the chant of "they judge you, they judge Christ" at the end, intermingling it with "Godspeed for women's rights", before he suddenly left the stage, leaving his dancers behind.

The plea for women's rights appeared to be a protest against the US court's recent decision to end the constitutional right of Americans to abortion.

The judgment came after the right to choose abortion had existed for almost 50 years and paved the way for half the country to severely restrict or completely ban the practice.

Several musicians during the festival condemned the reversal of the landmark Roe v Wade ruling that had allowed nationwide abortions in 1973 including Lorde, Billie Eilish, Olivia Rodrigo, Idles and Phoebe Bridgers.

Earlier, the Pyramid stage had hosted rock band Elbow, whose act featured a giant puppet of a 10-year-old Syrian and a choir of refugees.

Meanwhile, Diana Ross left the crowd singing their hearts out by performing hit after hit during the day's teatime legends slot.

On Saturday evening, Sir Paul McCartney gave what some said was among his most memorable performances with a three-hour slot including surprise guest appearances from Bruce Springsteen and Foo Fighters frontman Dave Grohl.

But the BBC was widely criticised for not showing the entire performance live, with coverage not starting until an hour after he came on stage. The corporation then further angered music fans by not putting it on its streaming platform iPlayer until late on Sunday.

In a statement, the BBC said:

"Paul McCartney's much anticipated set was broadcast on BBC One at 10.30pm as well as on Radio 2 and will be available on BBC iPlayer and BBC Sounds.

"Due to the complexity of broadcasting an event of this scale and the volume of performances we cover, there is sometimes variation between performances taking place and their transmission."