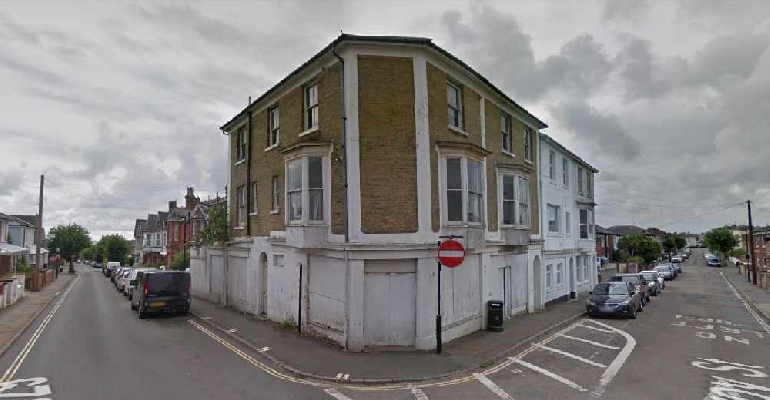 The Isle of Wight Council is taking steps towards forcibly buying a Sandown eyesore.

Derelict buildings on the corner of Fitzroy Street and Station Avenue are the potentially the subject of the council’s first Compulsory Purchase Order (CPO) since the renewal of its Empty Property Strategy in 2019.

A CPO gives the government, utility companies and in this case, councils, a statutory right to buy or take a right over a property in certain circumstances.

The majority of the Sandown properties, which consist of four commercial units and five flats, have been completely empty since 2008.

The building has remained in the same ownership ever since.

In 2008, the building ‘significantly’ deteriorated, falling into ‘serious disrepair both externally and internally’, according to the Isle of Wight Council, following a fire caused by an arson attack.

A report going to the council’s cabinet, next Thursday (January 14), is seeking permission to support the principle of getting a CPO to potentially bring them back into use, providing housing.

Plans were submitted by a housing association in 2010, to demolishing the buildings and build six flats, but the association ceased operating on the Island.

Due to the project stalling, and the increasing frustration of neighbours, complaints were made to the council about the property and the authority has decided again to take action.

The Empty Property Strategy was approved to bring long-term empty properties back into use and increase the supply of homes for residents by encouraging owners to make use of the property or, in more serious cases, look at formal enforcement.

The Sandown properties are considered a priority for intervention, due to the length of time left empty, and the detrimental effect they are having on the surrounding area, as it is in poor visual condition.

The buildings on Fitzroy Street and Station Avenue have also been served a planning notice due to the poor conditions, with 22 requirements to improve the land, including cutting back and removing overgrown vegetation, repaint parts of the building and improve the condition of some of the panels and doorframes.

According to the council, over the past 12 years, the authority has sent 28 letters, made 23 phone calls, sent nine emails and hled five meetings with the owner to try and progress the development with the 2010 project being the only plan to proceed as ‘he failed to engage’ with two other housing associations.

It is recommended the council agree to a CPO in principle which means a further report will come to cabinet with more details of the acquisition, costs involved and risks identified, determining the best way to proceed and seeking the formal resolution to make a CPO for submission to the Secretary of State, who will make the decision about whether it can go ahead or not.

While that is happening, the council report says officers will continue to negotiate with the owner to encourage him to bring the building back into use.