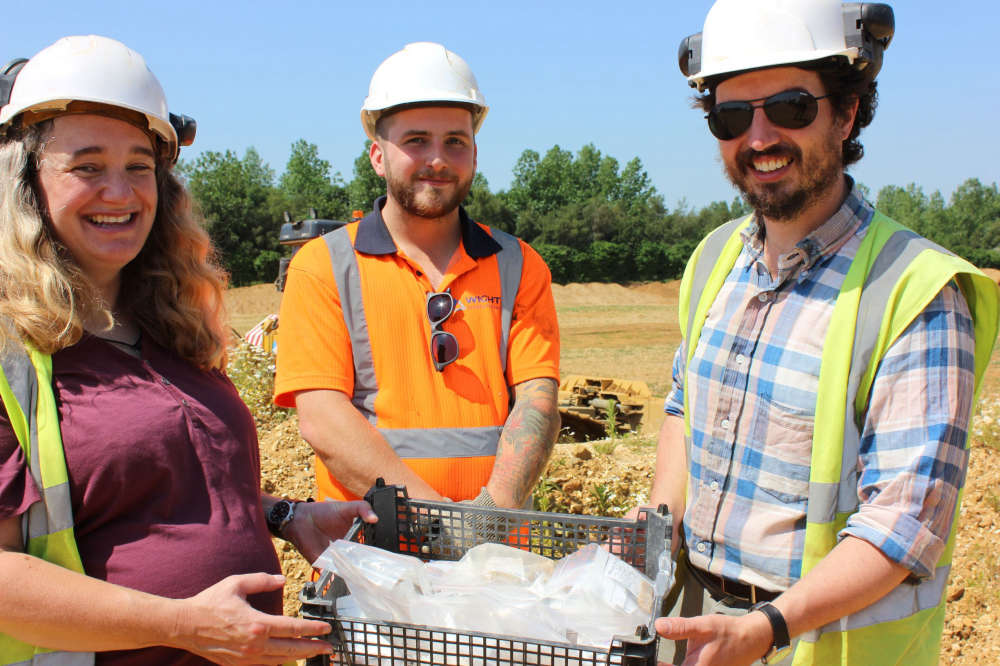 Roman pottery is among the artefacts unearthed in a quarry project underway in the Arreton Valley.

A fascinating insight into Bronze and Iron Age life is being unearthed by Wight Building Materials and archaeologists from Southampton City Council Archaeology Unit.

The discovery of hundreds of artefacts has enabled experts to chart a legacy of intensive farming through the Bronze and Iron ages and has also raised the likelihood that the area is also hiding an as- yet undiscovered settlement.

The collection of pre-historic fragments are being dug up at Hale Manor Quarry from which sand and gravel is being carefully extracted by Wight Building Materials. The work is subject to planning conditions one of which is to work closely with archaeologists to ensure the site’s history – or at
least that not already lost to time and the plough over the centuries – is preserved.

Each piece is examined, catalogued and will in turn be presented to the Isle of Wight Museum Service. Because virtually all the pieces are fragments, they have little or no monetary value nor will they be suitable for display. But they are nevertheless helping to paint a picture of life in the Arreton Valley during the bronze and iron ages and also during Roman occupation.

“It is a really productive site and is showing an unusually intense level of agricultural activity which is very exciting. And all these people working the fields – coupled with the fact we have also found daub which was used as a building material – means that there must be a settlement still to be found here somewhere. I don’t think it will be a Roman villa or anything like that but it could be quite significant…if and when it is found.”

What else lies in store while Wight Building Materials works the remaining extraction plots remains to be seen but Emma is grateful for the company’s diligent work with her team.

“The simple fact is that without this sort of controlled excavation we would not be able to piece together the history of this location. The historical evidence has slowly been destroyed by time and agricultural activity and this quarrying has allowed us to get in here and find out much, much more. We have hugely increased out archaeological knowledge of this area as a result of working with Wight Building Materials.”

Existing records showed the existence of one nearby Bronze Age burial mound – or barrow – but the work has also uncovered several more which have been recorded along with details of how the land was farmed by the early settlers.

Among the fragments collected are Iron Age cutting and scraping tools, pieces of iron and bronze age pottery and also more sophisticated pottery from Roman Times - ‘plebware’ as it is termed in archaeological circles.

“Most of what we are finding was already broken as it would have been discarded by the early settlers. The Romans certainly did get through some pottery – it’s fair to say they weren’t big on re-cycling.”

“We are very much a local company and are really pleased to be playing a role in helping to uncover and understand the Island’s past. While the work with Southampton City Council Archaeology Unit has meant excavation and extraction has sometimes been particularly painstaking, it is extremely important to respect the history buried in the ground beneath us. Planning conditions are in place for very good reason as this work demonstrates and we will continue to act responsibly as we undertake the remaining quarrying activity at Hale Manor and, indeed, whereover we operate.”