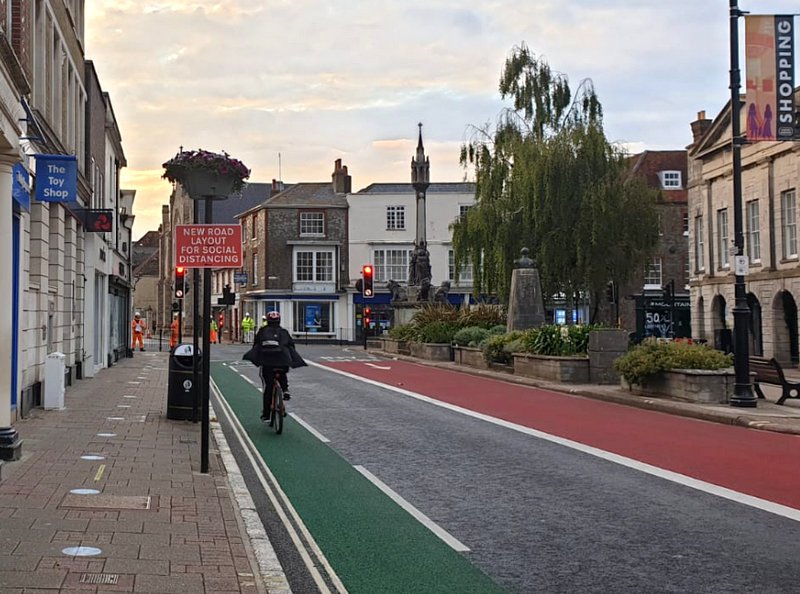 Social distancing precautions in the Island’s town centres will be in place for at least 12 weeks — with some aspects potentially remaining for the next year.

Painted spacing dots, temporary speed limits and parking restrictions have all been put in place across the Island in the last few weeks to aid social distancing on high streets.

Measures have now been completed and installed in Sandown, Shanklin, Ventnor, Newport, Ryde, Cowes and Yarmouth.

Despite originally meeting some opposition, the council has said it is a statement of intent that meets government guidance, and supports to businesses to reopen.

Colin Rowland, the Isle of Wight Council’s director of neighbourhoods, said the decision had been made to leave the works as they were.

Speaking at a meeting of the policy and scrutiny committee for regeneration and neighbourhoods, he said:

“The intention is these short-term measures are due to be there for at least the next 12 weeks.

“The paint that has been provided, the stencilling and the painting on the ground is intended to be washed away within the period of about a year, so they are not permanent markings.

“Any further measures in any of the towns need to be done in consultation with towns and business groups themselves and will form longer to medium-term measures we want to introduce in part of reopening towns.”

Cllr Julie Jones-Evans said it was good to hear measures could be supplemented and done so in a more friendly way as some people have found the current red and white markings make them quite anxious, as they look more like danger, warning signs.