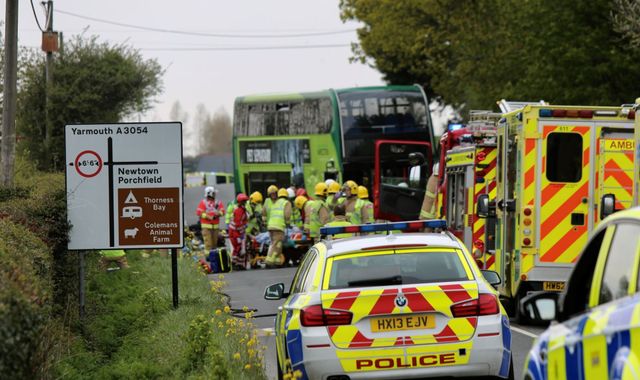 No traffic lights but move a hedge — that is the recommended option to improve a deadly junction.

In April 2019, a three-vehicle crash on Forest Road, Newport took the life of Yvonne Copland, 64.

A car failed to give way on Whitehouse Road, hitting a bus which tried to avoid the impact by swerving onto the other side of the road, causing a head-on collision with another car.

The driver of the first car, Yaashmi Ravikumar, 20, was sentenced to serve two years and four months’ detention in a young offenders’ institution after it was found her driving and lack of attention caused the fatal incident.

In the aftermath of the crash, a petition was launched which gained nearly 7,000 signatures calling for the Isle of Wight Council to install traffic lights on the crossroads, in a bid to improve safety and prevent further collisions.

Accident data from the Isle of Wight Council and Island Roads show there is a ‘high probability’ of a crash occurring at that junction at least once every year, and it is ‘likely’ that between 25 and 50 per cent of those accidents could kill or seriously injure someone.

In the last five years, seven recorded collisions have happened at the junction — one fatal and three serious — with six of those collisions involving vehicles exiting Whitehouse Road on to Forest Road.

Forest Road, the main strategic route from Newport to the West Wight, is thought to be used by approximately 10,000 vehicles a day and its junction with Whitehouse Road is currently in the top ten potential safety schemes on the Island’s Highways Safety and Improvement Register.

A report going to the Isle of Wight Council’s cabinet next week, which has reviewed the petition and outlines potential improvement to the junction following a full technical assessment, said any improvement to road safety will ‘positively impact’ the council’s objective of protecting the Island community.

The recommendation of the report, however, goes against what was asked for in the petition — the installation of traffic signals — and instead opts for a scheme to be fully designed and costed for realigning a hedge which would improve the visibility of the junction when entering Forest Road, from Whitehouse Road.

It is also recommended to specifically add the site into the Island-wide strategic speed review currently underway, potentially reducing the speed of Forest Road at this location.

“The highways safety inspector has determined that installation of traffic signals may not reduce the risk of conflict at the junction and could increase the number of collisions due to rear-end shunts.

“The request for a signalised junction has been discounted due to the likely increase in the number of collisions, the rural nature of the junction and other factors present in this location.”

The council report says there is a ‘public perception risk’ of not acting on the intent of the petition due to the risks associated with the requested traffic lights scheme but the recommendation is based on technical advice and standard methodologies.

It is though the installation of signals at this junction could cost between £400,000 and £600,000, not including ongoing maintenance costs.

In defence of not recommending the installation of traffic lights, the report also looks at the safety scheme devised for the Fighting Cocks junction in Arreton, which had a higher collision rate than the Forest Road and Whitehouse Road junction.

While ‘not directly comparable’, the collision rate at the Arreton junction was brought down to a ten-year accident average of 0.2 accidents occurring per year, from 3.2, without installing traffic lights.

However, in a technical investigation report by Island Roads, the highways network authority’s final recommendations are to undertake feasibility designs for both a signal-controlled junction, which would ‘greatly reduce’ the risk of collision, and a roundabout at the junction to lower accidents by 50 per cent and ‘significantly’ lessen the probability of future fatal or serious injury-causing accidents.

The decision as to whether to follow the recommendation, and realign the view-obstructing hedge, will be made by the Isle of Wight Council’s cabinet next Thursday (January 14).

To read the full reports by the Isle of Wight Council and Island Roads, you can view both, through the agenda for the meeting here: iow.moderngov.co.uk/ieListDocuments.aspx?MId=194&x=1.