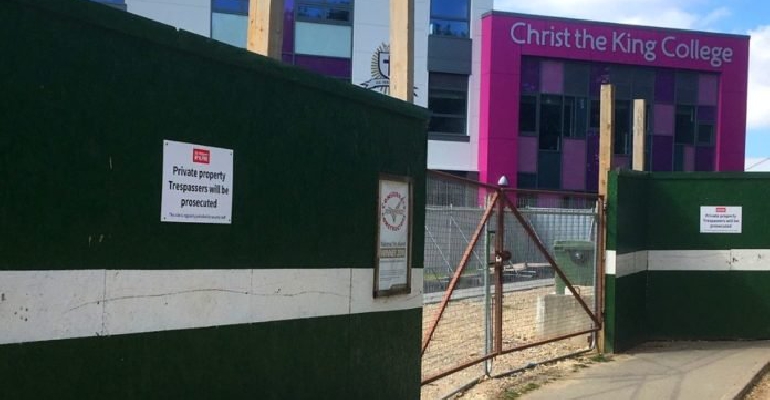 Christ the King College (CTK) cannot use its controversial sixth form building — after the contractor which built it appealed in a legal battle about finances.

Last month, the Isle of Wight Council and CTK announced they had won their court case against contractor BOSHire — saving more than £10 million in service charges - as previously reported by Isle of Wight Radio.

Now heads at the faith school in Newport have written to parents to tell them they cannot use the building, after an appeal against the ruling was filed yesterday (July 15).

The school breaks up for the summer holidays next Thursday (July 23).

In the letter, Matthew Quinn, executive headteacher, Nora Ward, head of school, and Elizabeth Burden, chair of governors, told parents that since the judgement, the school had been working with the council to secure a solution over the use of the building.

“We knew this was going to be a difficult process, but we're confident that we would make the necessary headway.

“As the building does not belong to the Isle of Wight Council or college, we are now in a position where we can no longer use it. This is not the news any of us want at the end of term. The sixth form is one of the many strengths of the school; it’s a key pillar in our ethos. This will continue.”

The school, however, says it remains ‘confident’ it can continue to provide all courses that are being offered at the sixth form, with space in the main school building.

In 2013, Christ The King governors entered into a 15-year hire contract with BOSHire for the modular sixth form building.

However three years later, in 2016,  the council issued a financial notice of concern which meant the school was not allowed to build up any additional debt.

As part of the contract with BOSHire, the building would cost more than £650,000 a year to service.

Following the notice from the council, the school was unable to meet the terms of the contract and the contractor started legal proceedings.

In the judgment in May, Mr Justice Foxton, ruled the school had entered into the contract in such a way it had no legal authority to do and now it needed to ‘seek to reach agreement’ with the contractors. An appeal has been filed instead.

The letter to parents continues:

“There is still a possibility this situation will be resolved before the end of the summer holiday; this is what we hope and pray for. However, I have to be realistic about the current situation.”

One possibility the school mentions is to adopt some remote learning, but the majority of lessons would follow normal practices.

The Isle of Wight Council, Christ The King College and BOSHire has been approached for comment.