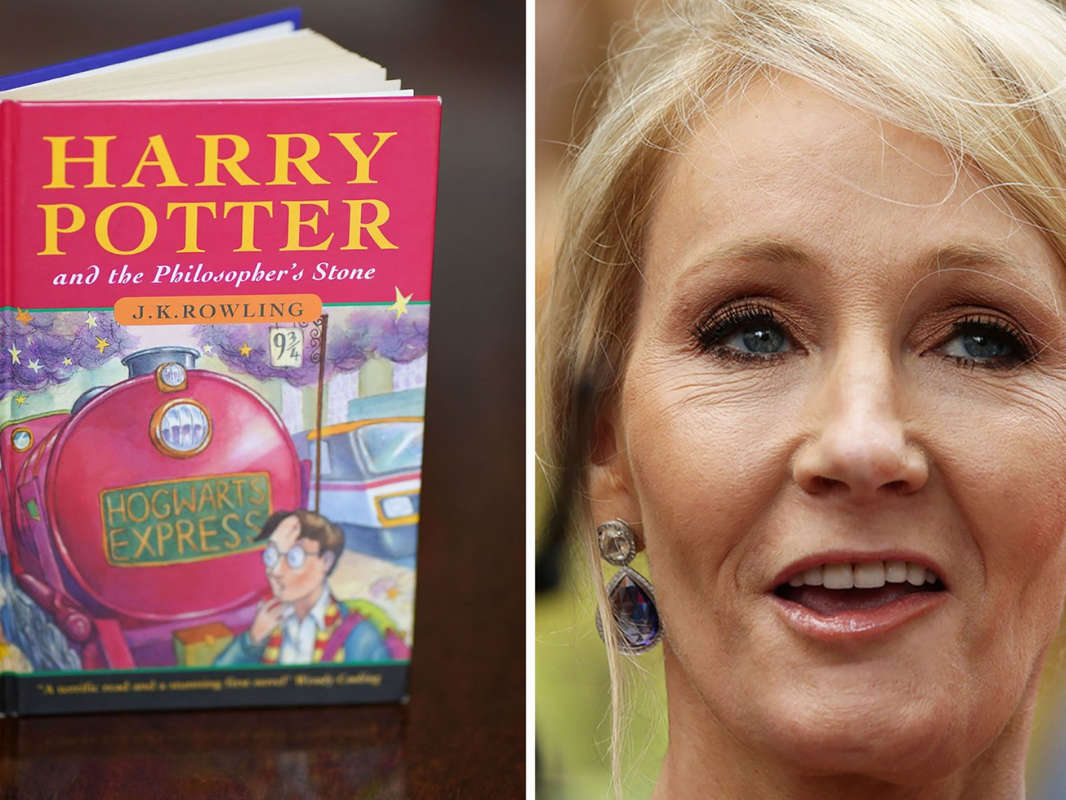 JK Rowling is absent from Harry Potter and the Philosopher's Stone 25th anniversary events - whether the author has been or should be cancelled continues to obscure the future of the Boy Who Lived.

Cast your mind back 25 years. Hanson's MMMbop was number one, Titanic topped the box office, and Tony Blair had just been elected PM.

But perhaps more culturally significant than all three 90s moments is the first 500 copies of Harry Potter and the Philosopher's Stone being published at the end of June 1997.

It would become the third best-selling novel of all time, establishing JK Rowling as one of the world's most loved and best-selling authors; a towering figure in the arts.

But the prolific author's legacy now seems destined to be defined by the culture war sparked by her position on women's rights and gender.

Rowling thinks, in some circumstances, women and girls should have the right to single-sex spaces - prompting accusations of transphobia, which she denies.

The controversy has rendered the author notably absent from anniversary celebrations - as was the case with the recent TV reunion - decisions widely presumed to be driven by the deepening controversy.

Attempting to separate the art from the artist is now apparently a mission for many invested in ensuring Harry Potter continues to be lucrative.

Sky News was invited to a new Mandrakes and Magical Creatures feature at Warner Brothers Studios this week, and such is the effort to distance the brand from the toxicity of the debate around trans rights, Sky News wasn't allowed by the PR to bring up JK Rowling's name in the interview.

Our reporter was interrupted mid-flow and made to redirect the line of questioning.

When we asked why, the response on email was "JK Rowling is not connected to Warner or Tom Felton, the team felt it was not relevant to the piece"...* Not aside from the fact she created Harry Potter and executive produced the films.

(For the record, PRs don't and shouldn't - for all sorts of reasons not least press freedom - dictate Sky News editorial direction.) 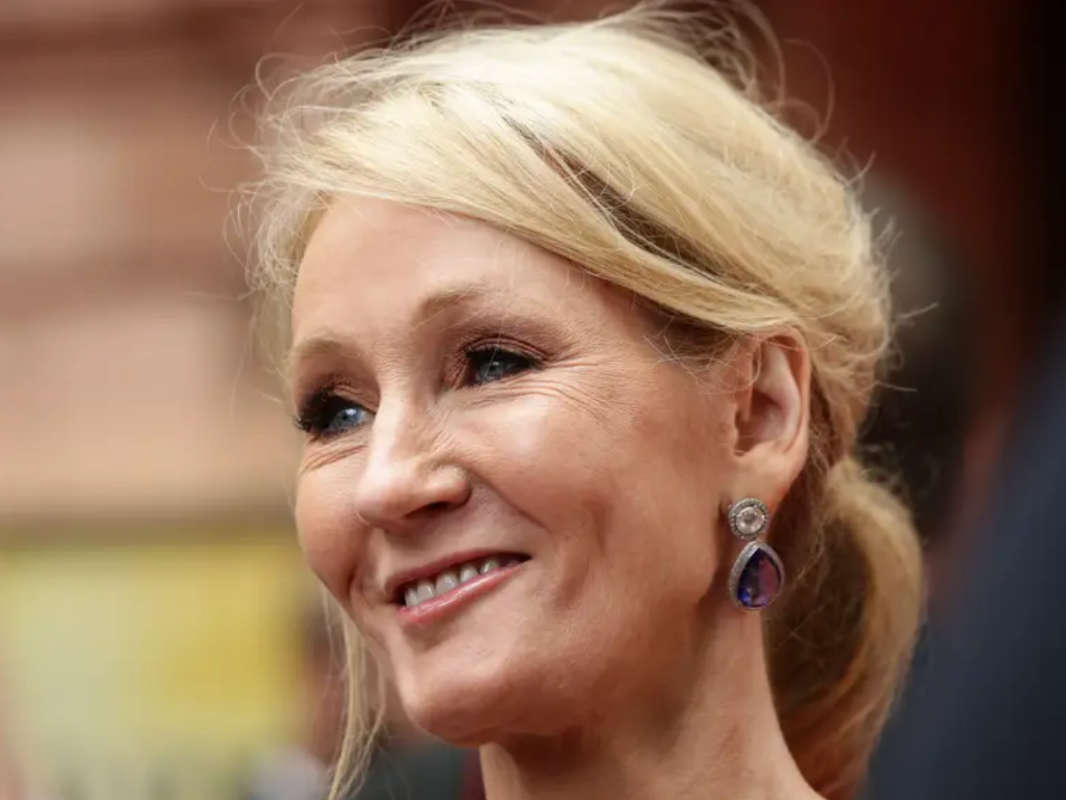 Felton - left somewhat awkwardly momentarily in the middle - was allowed to tell us: "I was auditioned 500 metres from where I am now, which is nuts.

"We all expected the Harry Potter fandom flame to start dousing as the years go on and clearly it's not going anywhere," Felton added. 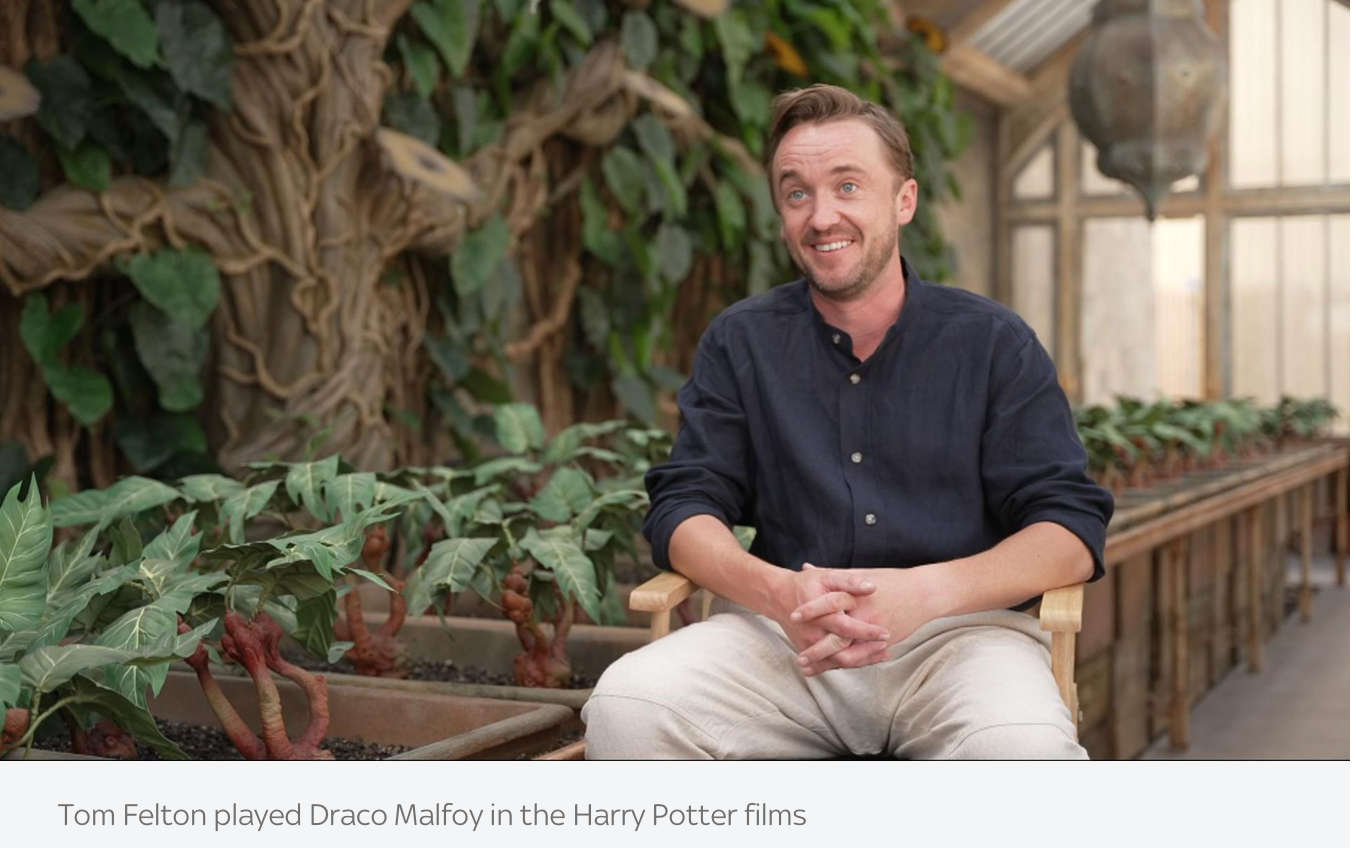 So 25 years on, Harry Potter is as popular and profitable as ever and seems unscathed - apparently, as long as you don't mention she who must not be named.

The notion that JK Rowling can or should be cancelled is bizarre to many, but trans woman Nicci Take, who enjoyed reading and watching Harry Potter with her children, told Sky News she is largely just deeply disappointed by it all.

"I am anti-cancel culture, she should be allowed to say what she thinks," says Nicci Take. 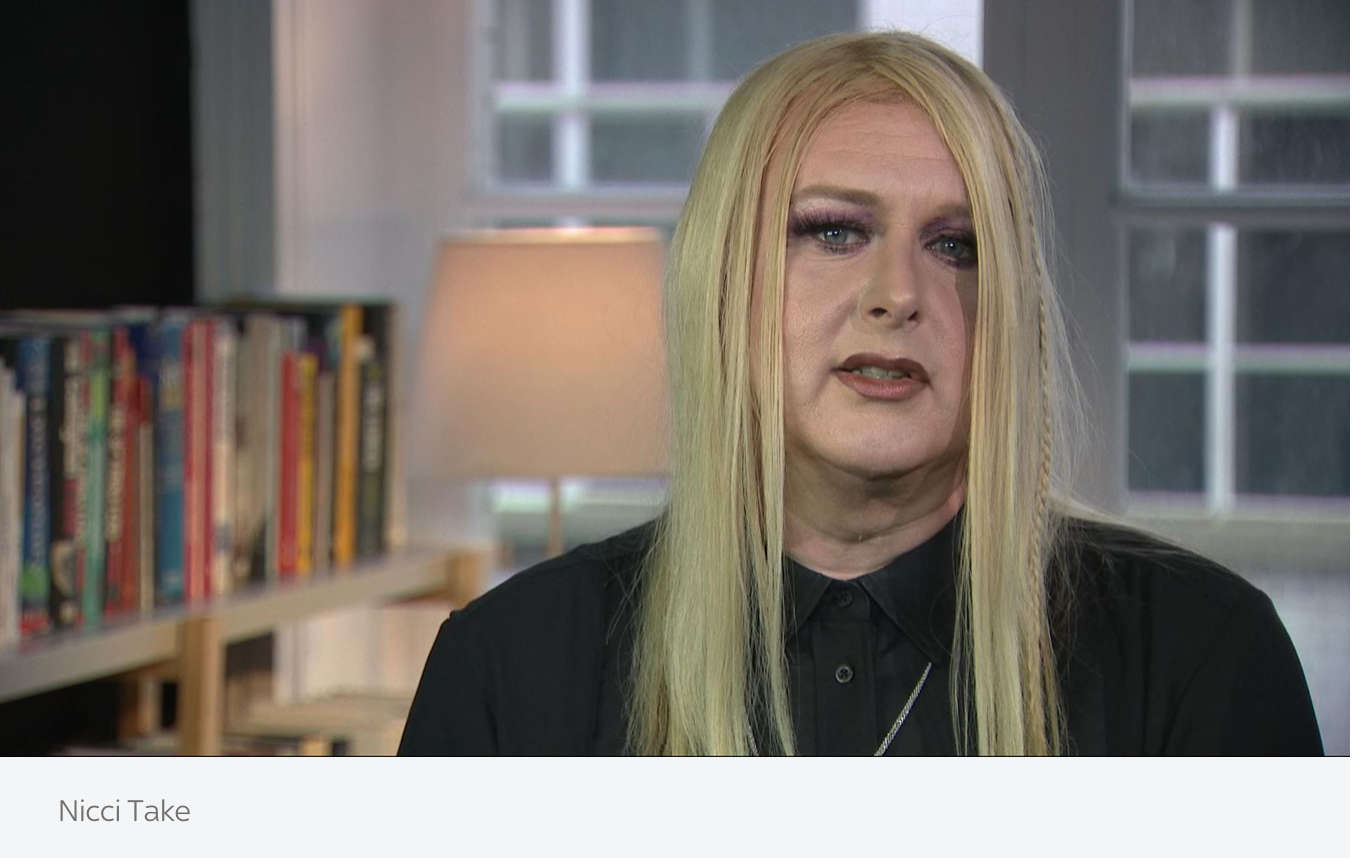 "That's what happens, people don't meet us, engage with us, and yet they have opinions about us," she adds.

Most associated with the wizarding world are perhaps understandably reluctant to comment on the clash, but many concede Rowling is taking more of a backseat.

Thomas Taylor, the original front cover illustrator of Harry Potter and the Philosopher's Stone (who told me he wishes he'd made Harry's hair "madder" - which I love) agrees the author seems to be less prominent in events.

"It is a bit strange not to see the author when we are celebrating a book," admits Mr Taylor. 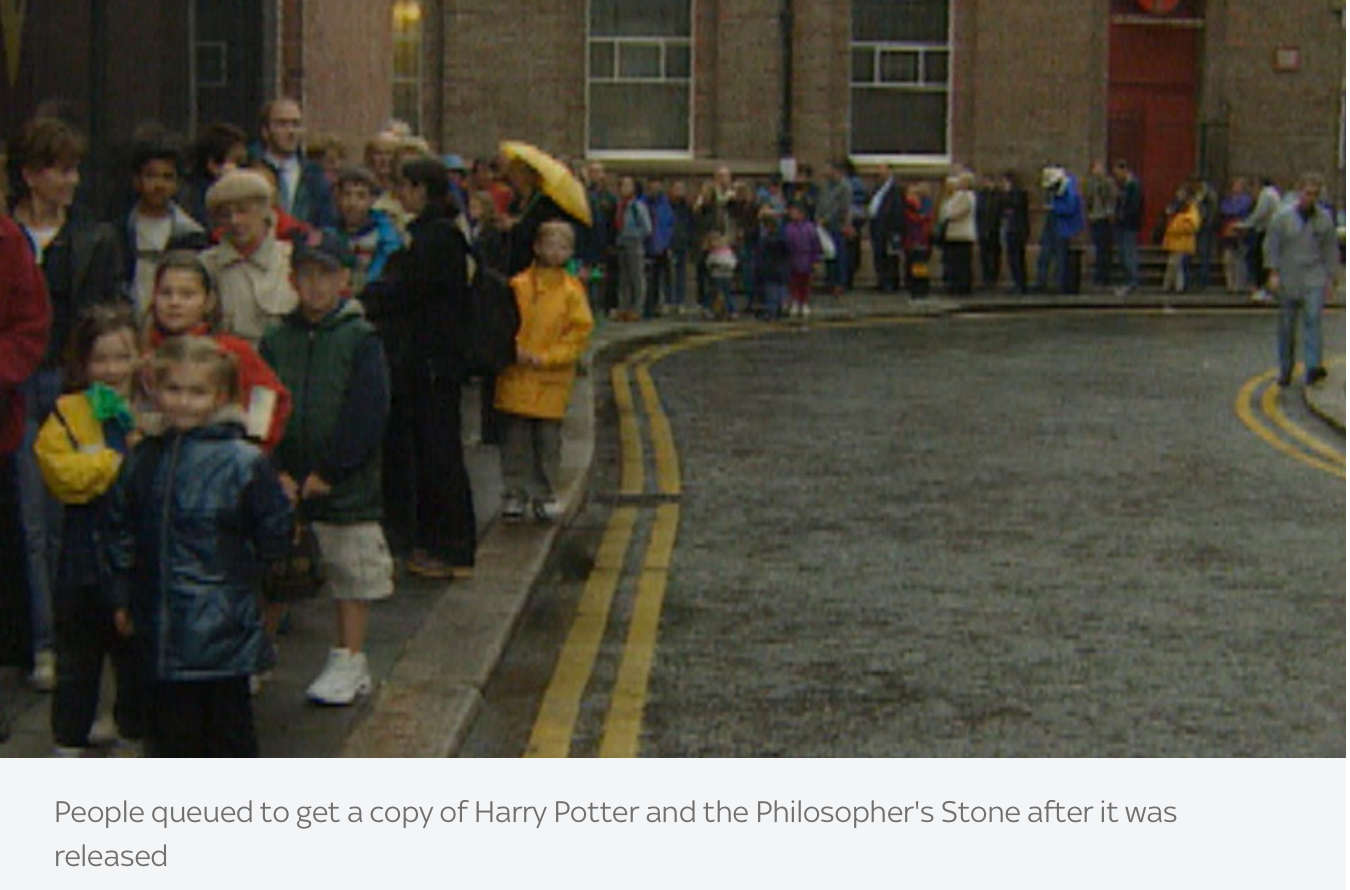 "It seems to me that fans own Harry Potter now anyway, the fan space has always been incredibly rich, creative and inclusive and I hope people can continue to find what they need in it and shape it to the way they want it to be," he adds.

Taylor credits the books with bringing back reading when "in the 90s we were panicked that reading was dying off, with video games and TV".

"This book came along and children were queuing up at midnight dressed up as wizards to get hold of the latest copy and read it, that's definitely worth celebrating," he said, reminding us of the fevered fandom that HP ignites. 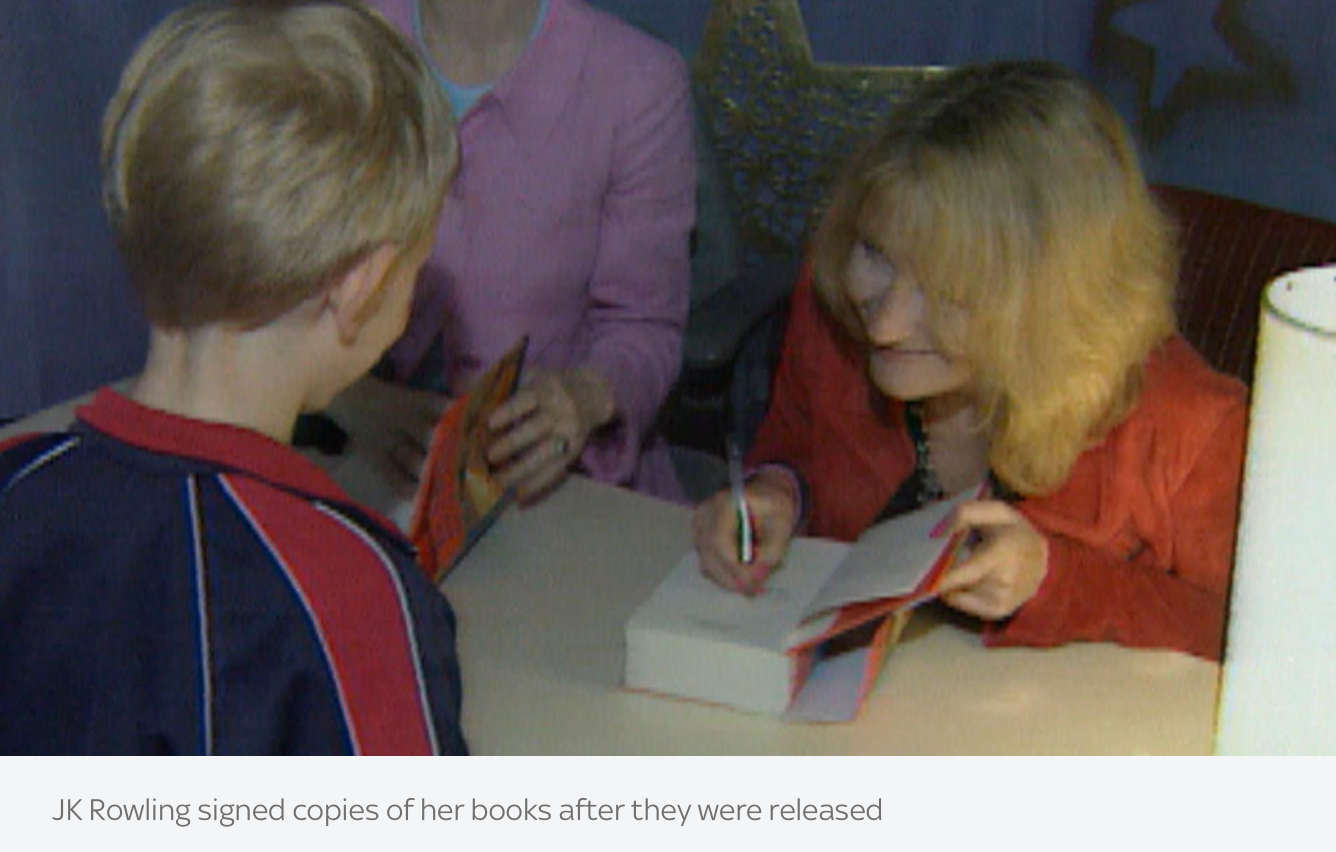 The Harry Potter cast seem also to be torn between their relationship with Rowling and any discomfort with her position on gender rights.

Daniel Radcliffe was quick to issue a statement confirming his solidarity with the trans community, saying "trans women are women".

He also reassured fans, saying: "if Harry Potter resonated... that is sacred", in a plea to separate the art from the artist. 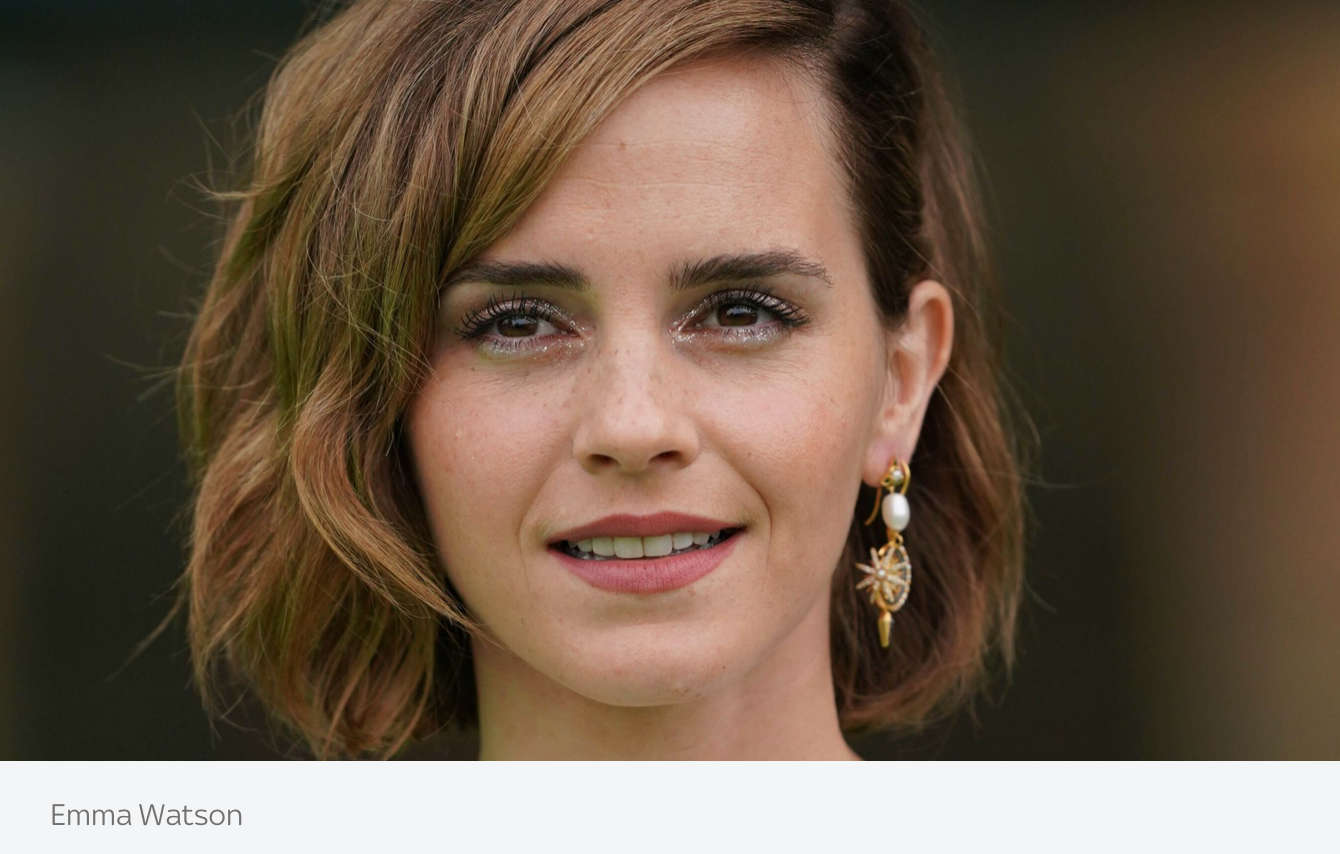 Emma Watson appeared to take aim at Rowling in her BAFTAs shout out for inclusivity and "all the witches".

So, while the polarised debate is largely hosted on Twitter, its toxic mess spills over the edge of the social platform, leaving an unfortunate stain on the record of modern public discourse infiltrating our biggest cultural and media institutions from BAFTA to Warner Bros Pictures and Bloomsbury publishers.

All of them now forced to consider how to navigate events being hijacked by the issue.

Mina & Eduardo Lima are the MinaLima illustrators who have worked on the Harry Potter films and a special 25th edition copy of the first book.

Mina Lima points out the world now transcends the author.

"The wizarding world has become so established now, what she did was entrust creative minds to tell their version of her worlds, our book is just one of those manifestations as well so it's almost like she's done her genius and now she hands over the baton," Lima told Sky News. 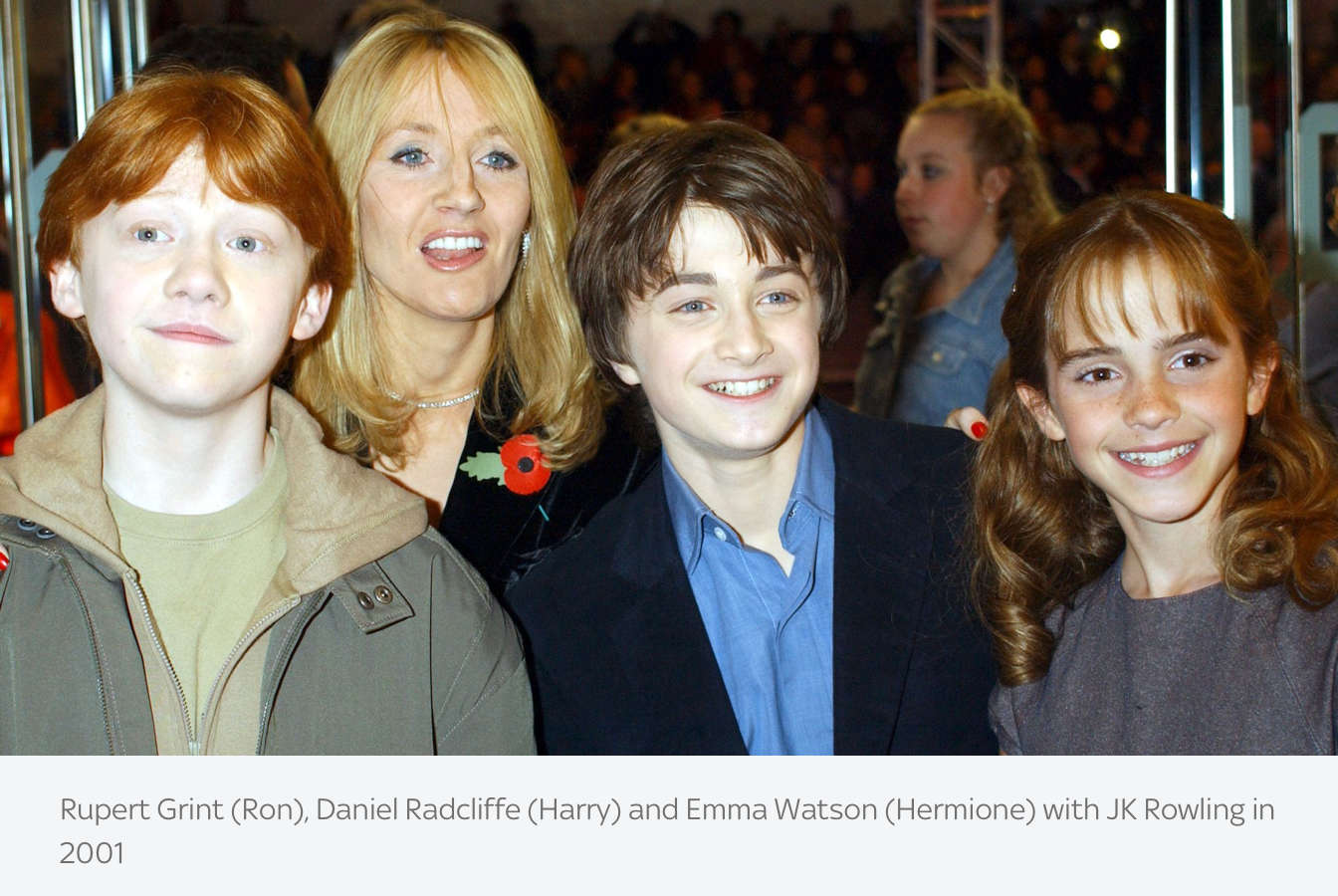 So perhaps it doesn't matter that JK Rowling isn't present at the anniversary celebrations.

Perhaps she and HP fans don't care whether she attends events held by those invested in ensuring Harry Potter continues to be wildly profitable.

Such is the intensity of the debate, Rowling revealed earlier this year that she's had so many death threats she could wallpaper her house with them after trans activists doxxed her (meaning they published her address and personal information on the internet with malicious intent).

But as the 25th anniversary of one of the world's most beloved books is celebrated, whether Rowling has been or should be cancelled continues to obscure the future of the Boy Who Lived.

*More radio has since received an email from Fever PR saying:

"...the email mentioned in your article about Tom Felton, did not come from Warner Bros., is not official or accurate of the company’s position.

"The information was provided by the third party agency partner involved in this event, and was based on supposition, and therefore is incorrect."