Mass: The Film Exploring Forgiveness In The Aftermath Of A US School Shooting Massacre 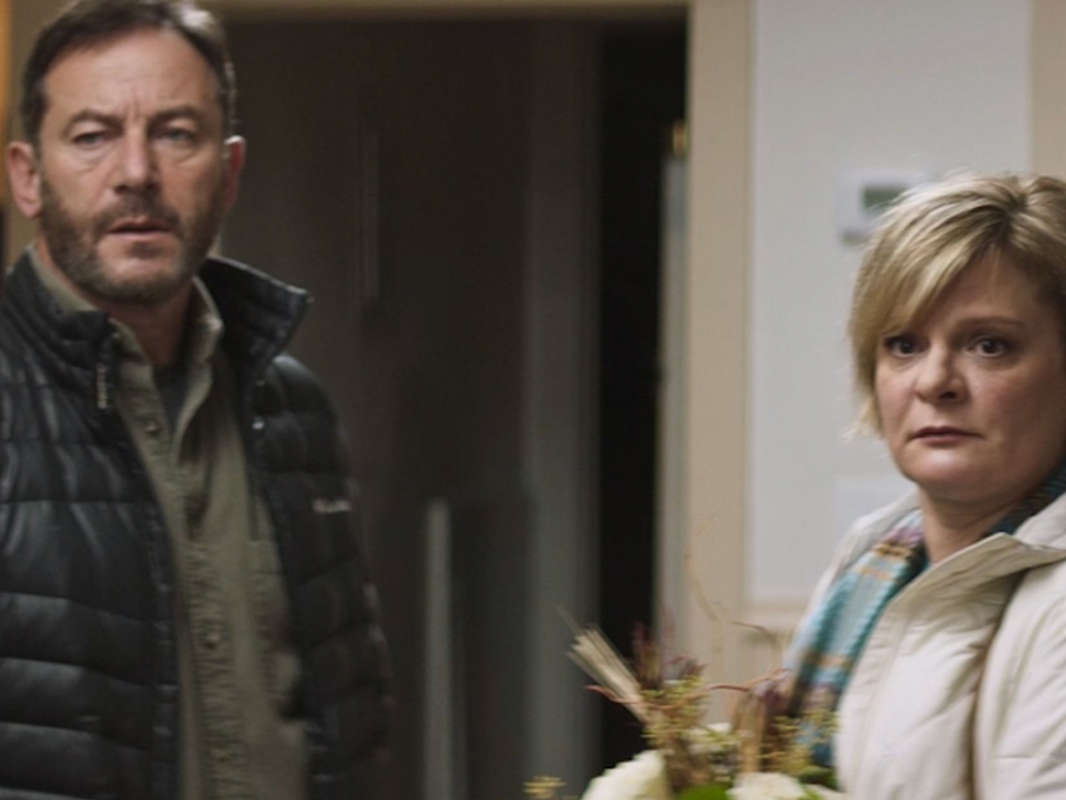 On the day of the Parkland school shooting in Florida, Valentine's Day 2018, like many, actor Fran Kranz found himself trying to make sense of the senseless.

Fourteen students and three teachers died in the massacre, which came after so many before: Columbine, Aurora, Virginia Tech, Sandy Hook. Just a few weeks ago, four students were killed after a fellow pupil opened fire at his school near Detroit in Michigan.

Kranz, probably best known at that point for his portrayal of Topher Brink in the science fiction drama series Dollhouse, as well as films including Cabin In The Woods and The Village, went online to order books on the mass killings. Having become a father for the first time in 2016, the Parkland shooting affected him so deeply, he couldn't not do something, he says.

The tragedy became the catalyst for his directorial debut, Mass; a raw and painfully intimate story of two sets of parents meeting in the aftermath of such a shooting. Starring Jason Isaacs, Martha Plimpton, Ann Dowd and Reed Birney, it is set almost entirely in one room; just four people, sitting around a table, talking.

The film premiered at the Sundance Film Festival in January 2021 to critical acclaim, and in December received the Independent Spirit Robert Altman Award - an accolade presented to the ensemble cast, director and casting director of a film, and previously won by the likes of Oscar winners Moonlight and Spotlight.

Kranz tells Sky News that through Mass he wanted to explore the themes of forgiveness and reconciliation; feelings that to those faced with the darkest of situations might seem impossible to come by.

"I wanted to believe they were possible - they were possible in my own life and in my family's life and in the world," he says. "We have these shootings in our country so frequently that it was on my mind and troubling me, as this new parent. What would happen? And so I was trying to with this film, in many ways, just to work through my own feelings on the subject of forgiveness."

Kranz was also inspired by South Africa's Truth and Reconciliation Commission, a restorative justice body set up in 1996 to investigate human rights abuses after the end of apartheid, chaired by the late Desmond Tutu, and The Forgiveness Project.

"I felt like I wanted to do something with these stories," he says. "But I'm not South African and did not know how I would participate in something like that... [then] the day of the Parkland shooting, I was so overwhelmed I went on to Amazon and just ordered several books on mass shootings in America. I just thought, I need to understand what the hell is going on here.

"That's what started this kind of two years, essentially, of reading nothing but the subject. And it did get to a point where there was a moment, particularly around reading about the tragedy at [Sandy Hook], because of the age of these children... it was so emotional, crying in front of a laptop."

Kranz wrote and rewrote scenes for Mass, he says, realising the dialogue at first was "too decent, too polite... too rote". But it was something he felt he had to do, and knew he had to get right. 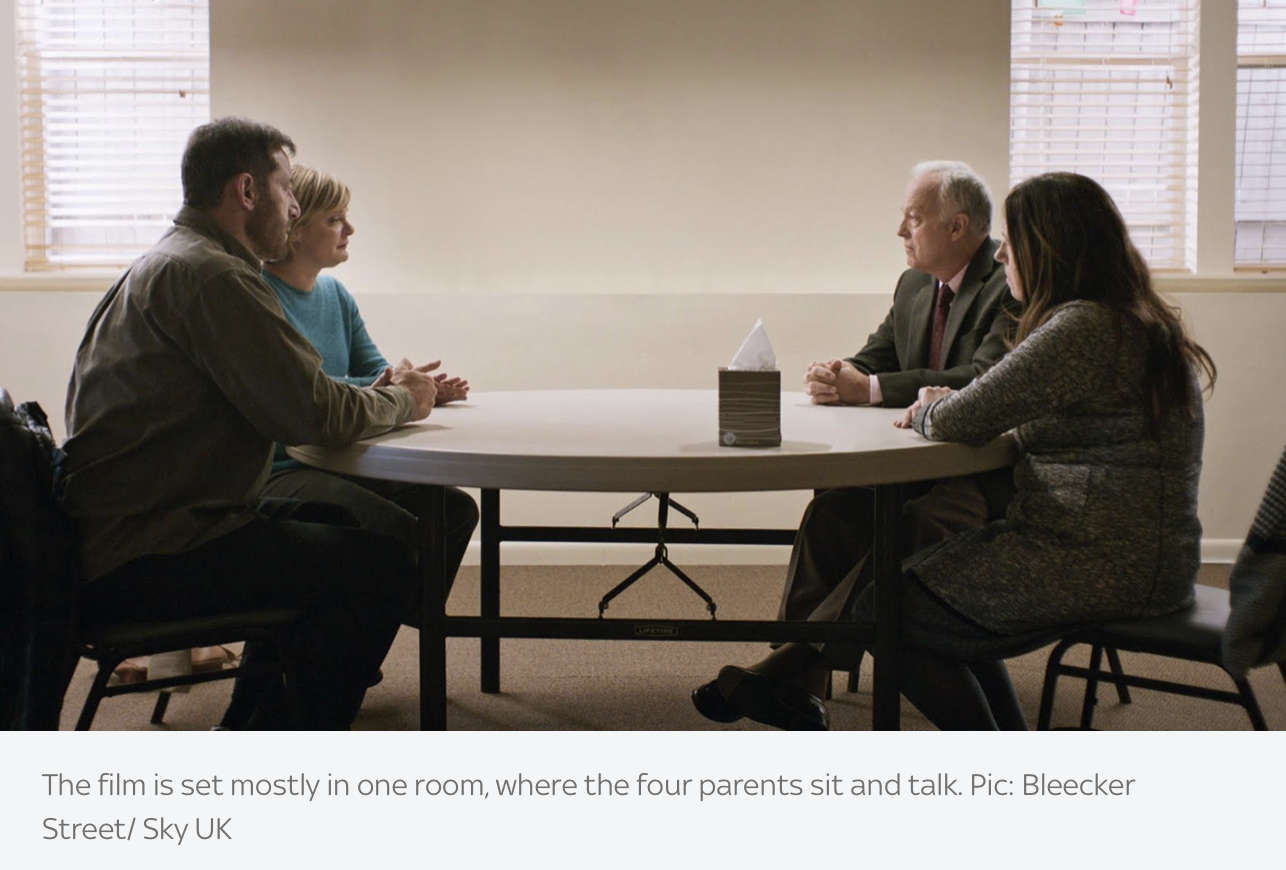 As part of her research, Dowd (The Handmaid's Tale, Hereditary, Compliance) read A Mother's Reckoning: Living in the Aftermath of Tragedy, by Sue Klebold, the mother of Dylan Klebold, one of the perpetrators of the Columbine High School massacre in 1999.

"She had lived the unimaginable story of [my character] Linda's life, essentially, of her son being the shooter, shooting many others, taking his own life. So I read it [but] didn't dwell on it, because the script was powerful and enough." 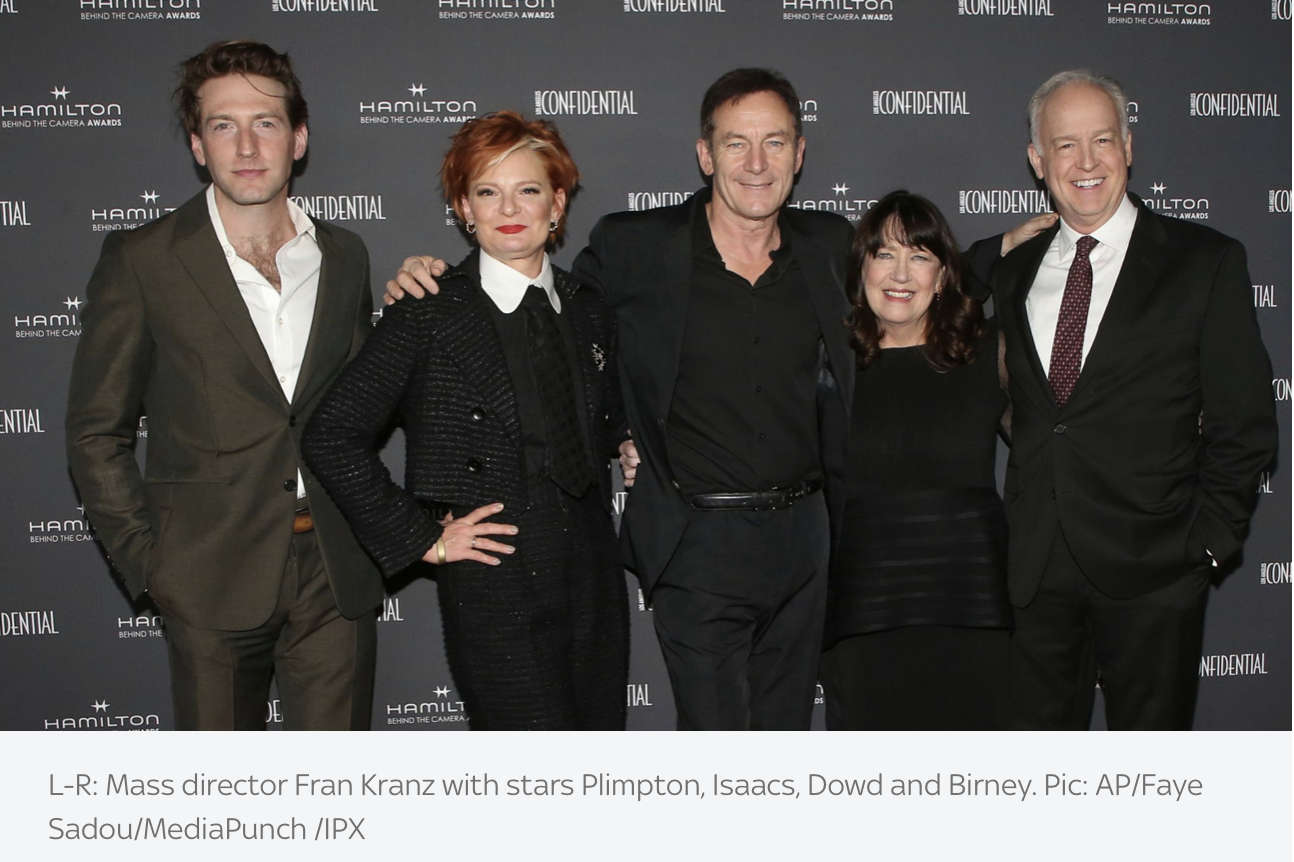 Despite the fierce arguments over gun laws in the US, there is no politics in Mass.

"It can't be a polemic and I have to approach it just from a human perspective and tell the story of human beings working through pain to try and get to a better place," says Kranz.

"If we can focus on the empathetic connection to people, we might find another way, or we might find ourselves in a place where some of these problems feel easier to solve because we're approaching it from a place of compassion for one another, as opposed to the adversarial approach of: you're doing something wrong and need to stop."

Plimpton (The Goonies, Beautiful Girls) and Isaacs (Harry Potter films, The OA, Hotel Mumbai) play Gail and Jay, the parents of one of the victims.

"At the time I read [the script] first, it was clear the world was incredibly divided," Isaacs tells Sky News. "Trump was president in America and was using blame as a tool, and Britain was divided by Brexit. [Mass] is a film about people whose lives have ground to a halt because they're so crippled by hatred and blame and resentment, and they're poisoning themselves for that. And it was kind of a plea for human connection.

"It's such a brave and bold subject to want to tell a story about, but it was made so personal and human; [it] had, at the same time, that gripping element of, I was desperate to find out what happened next. Four people enter a room; it feels like something terrible or wonderful could happen."

It's a film, essentially, "about four people talking", he says. "It doesn't have special effects or mountains or aliens. It's four human beings interacting at their most raw."

Isaacs says he hopes audiences aren't "misled" into thinking Mass is a film about a school shooting. "It really isn't anything to do with that," he says. "That happened many years before the film. We're a couple whose marriage has ground to a halt, our lives have ground to a halt, and we want to be able to move forward... I don't think it's about the people specifically to whom this has happened."

Plimpton disagrees. "We have a different perspective," she says. But they do agree that the central theme of the film is about moving forward in the face of unspeakable tragedy.

"It has the specifics of the universal, if that doesn't sound too pretentious," says Isaacs. "It speaks to anybody whose lives are held back by hatred or division or the notion that someone else is to blame."

Mass is about grief and moving forward: four people, sitting in a room, talking it out.