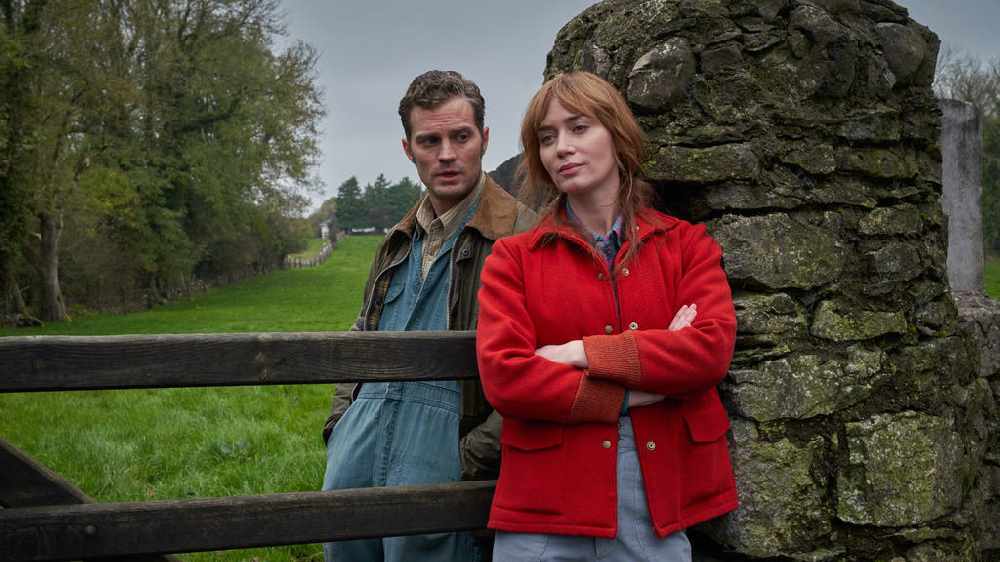 The latest charming rom-com pairing is Emily Blunt and Jamie Dornan. The stars discuss the appeal of Wild Mountain Thyme with Georgia Humphreys.

Wild Mountain Thyme is a romantic drama written and directed by New Yorker John Patrick Shanley – who created the classic rom-com Moonstruck – and is set in the bewitching Irish countryside. The film sees London-born Blunt, 38, play headstrong farmer Rosemary Muldoon; she has her heart set on winning the affections of her neighbour Anthony Reilly – played by Jamie Dornan – who she happens to have loved since they were 10 years old.

“It had this other-worldly quality to it; it’s this sort of heightened old-school, fairytale-esque romance,” notes 38-year-old Dornan, 38, who was born in Holywood, Northern Ireland. “And I think it’s easy to say this about work when you’re promoting it, that you’ve never read anything like it before, but I really hadn’t read anything like Wild Mountain Thyme before, and I think I speak for Emily when I say that too.

“They were just such unique, complicated, and really loveable characters who really needed each other for different reasons – and one of them could really see that and the other one couldn’t.”

Indeed, that’s where the problem lies for Rosemary. Anthony seems to have inherited a family curse and remains oblivious to his beautiful admirer – in fact, it seems that everyone in their farming community knows they are meant for each other, except him. Stung by his father Tony’s (Christopher Walken) plans to sell the family farm to his American nephew Adam (Jon Hamm), the situation becomes more complicated when Adam comes to visit, because he is obviously interested in Rosemary.

Anthony is jolted into pursuing his dreams, with everything that’s important to him about to slip through his fingers. But will a series of losses and his own uncertainty that he is unlovable get in his way?

Elaborating on the script, Blunt muses: “It’s almost like a long poem on how you can express love without ever saying, ‘I love you’, and I just thought it was so magical and funny. It resonated with me as well… I remember John Patrick Shanley said, ‘This is almost like a farce about a caution’ because of how cautious they are and how bad they are at expressing what they feel and what they mean,” follows the star, famous for her roles in Mary Poppins Returns, A Quiet Place, and The Devil Wears Prada.

“That makes a lot of sense to me, coming from England, where we’re sort of reluctant to say what we feel. And so, I found the whole thing so touching because it reminded me of my family, and people I know and where I’m from.”

Then there’s the intriguing rural setting too. Blunt recalls how she found the farmers in the film “so funny and strange and odd. They’d all been driven a bit mad by their isolation and loneliness. “I just really enjoyed them – I really enjoyed her. I wanted to play her.”

Dornan had lots of research to hand, thanks to living in the Cotswolds with his wife, Amelia Warner, and their three daughters. “I’m sort of surrounded by farms and by nature and fields and animals,” says the star, who’s known for the Fifty Shades film franchise, as well as gritty TV series, The Fall. “And I’m from Ireland; I didn’t grow up in the city, I grow up in what a lot of people would consider a very rural environment, and my mum’s family were pig farmers.”

While mother-of-two Blunt – who’s married to actor John Krasinski – presumably has a very different lifestyle (in an interview in Harper’s Bazaar last year, she discussed living in Brooklyn, New York), what she was very prepped for was the rom-com genre.

She suggests it’s the chemistry between the two leads that makes a romantic comedy one you really remember. “They put their fingerprints on you because you’re desperate for them to get together, or figure out their own crap that they’re trying to go through.” If the stakes are high in a romantic comedy, “and you genuinely don’t know what’s going to happen between these two, or what they’re going to say to each other,” then that helps too, she adds.

“And that’s also the beauty of John Patrick Shanley’s writing, is that it’s so surprising, it’s so unexpected; you never quite know what or how they’re going to express themselves to each other. So, I think that makes for a really entertaining experience, watching this.”

It seems like the dynamic leads had a great time working together on this, with Blunt describing her co-star as having “a lightness to him that makes you want to be around him” while Dornan quips: “What actor doesn’t want to work with Emily Blunt? We have a very similar way of taking on the work and we just have a load of fun.”

Blunt also addresses how Dornan “has played so many leading men who seem to have it all together, but I think Anthony is a lot closer to who he really is”.

“Jamie just really understands the introverted, reluctant, fearful elements of Anthony,” she says, full of praise. Indeed, Dornan calls Anthony the least “normal” person he’s ever played.“I’ve played some very dark characters, but never anyone as unworldly as Anthony,” he reflects. “He is just slightly in his own world and while it wouldn’t take much to make him very happy, he hasn’t been able to muster the right energy to make that happen and be fulfilled.

“I had to let all my insecurities and lack of understanding of certain elements of life come to the front with him. I feel like I’ve exposed myself more than I ever have in any other role.”

Wild Mountain Thyme will be available to rent in both the UK and Republic of Ireland from Friday, April 30