11 Of The Biggest Reveals From The Friends Reunion 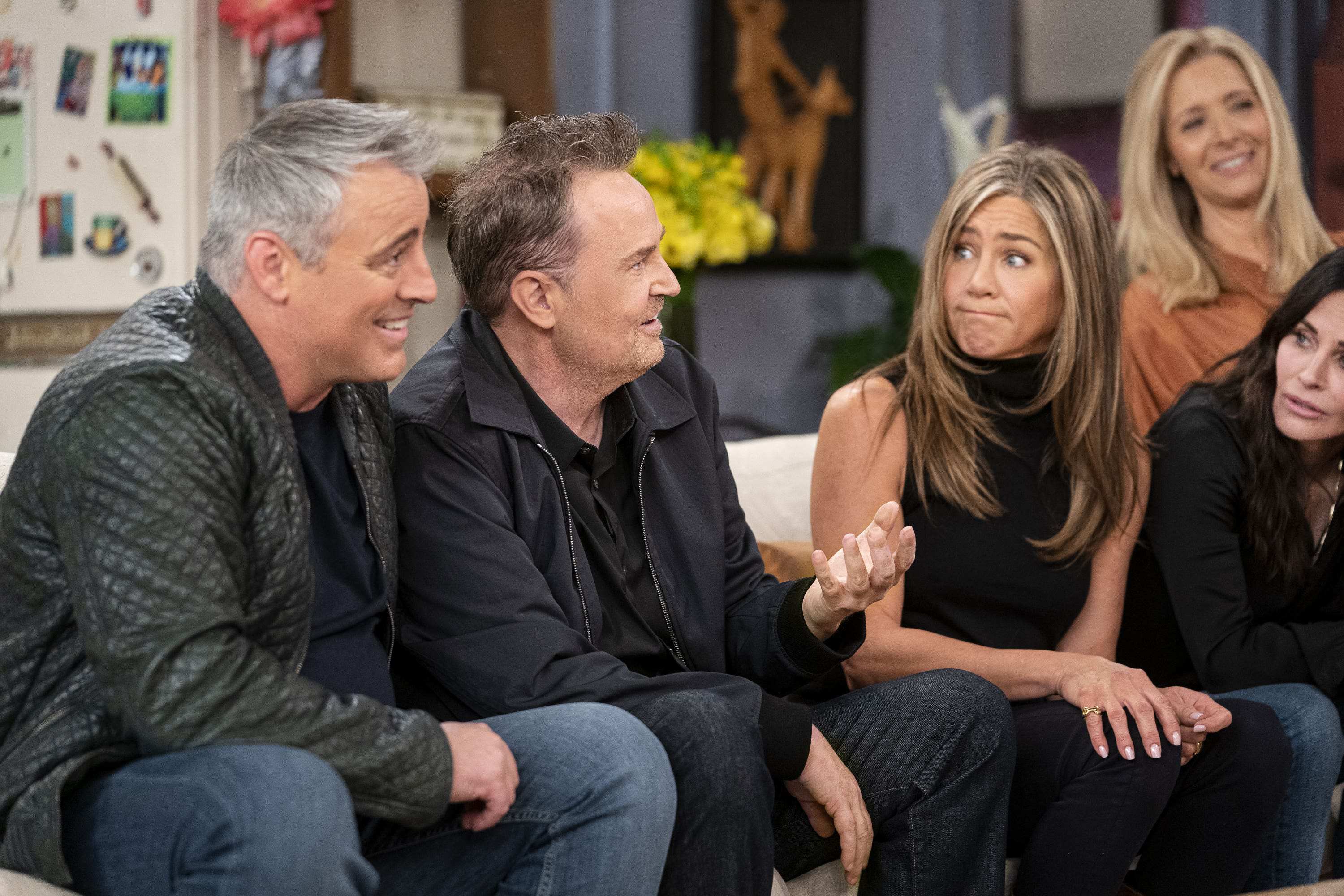 The cast shared a string of secrets from the hit show.

The cast of Friends has reunited for the first time since the hit sitcom ended 17 years ago.

Stars Jennifer Aniston, Courteney Cox, Lisa Kudrow, Matthew Perry, Matt LeBlanc and David Schwimmer got back together for a one-off special to look back at the beloved comedy.

The cast did not appear in character, instead speaking as themselves to share memories and secrets from the set.

Here are 11 of the biggest revelations from the reunion special.

Cox was notorious for not knowing her lines and kept her script in the kitchen sink of Monica’s apartment and wrote her lines on the table.

– Who took what from the set?

The Cookie Time jar from Monica’s apartment is now kept at Lisa Kudrow’s house, meaning the one that features in the reunion is a substitute.

Aniston took one of the coffee mugs, while LeBlanc took the original ball from the foosball table. He could not take the table itself because it got smashed.

Schwimmer had quit TV to focus on theatre before he was cast in Friends. Producers won him over because the part of Ross was written for him and he was the first person to sign on.

LeBlanc was still a relatively inexperienced actor when he landed the role of Joey and producers say he only had about 11 dollars to his name when he auditioned.

The other actor he was competing with to get the part ended up appearing in the show, playing the fake Joey in The One With Unagi.

LeBlanc went out drinking with a friend the night before his audition to get into character and fell over, smacking his face on a toilet. He ended up with a huge scab on his nose and after explaining what happened, he endeared himself even more to show bosses.

Producers wanted Perry for the role of Chandler but he had already signed on for another sitcom about luggage handlers in the future at LAX called 2194.

It was only when someone from Warner Bros was at the taping of the pilot and realised the baggage handling show was a non-starter that they knew it would be fine to give him the part.

– Cast romances that never were

While Ross and Rachel’s romance was one of the biggest plot points of the show, the actors almost followed in their footsteps.

Schwimmer said: “The first season I had a major crush on Jen.

“And I think we both, at some point, were crushing hard on each other but it was like two ships passing because one of us was always in a relationship and we never crossed that boundary. We respected that.”

Aniston agreed and confirmed their first kiss came on screen when Ross and Rachel embraced at the Central Perk coffee house.

She said: “So we just channelled all of our adoration and love for each other into Ross and Rachel.”

Rachel was the hardest part to cast and the last part they cast, as producers were worried she would seem too selfish and unlikeable.

Jennifer Aniston had already signed on to a show called Muddling Through which had shot six episodes but bosses cast her as Rachel anyway and said they would share her with the other show to see who wins in the battle of staying on the air.

Friends shot the first three episodes of series one while Muddling Through was still on TV, and if the other show had been picked up for a full series they would have had to reshoot those episodes of Friends.

When Aniston begged the producer of the other show to release her from her contract to do Friends, he told her Friends would not make her a star.

– Lisa Kudrow and Matthew Perry have not seen full seasons of the show.

Kudrow said she recently started watching some of season four with husband Michel, revealing: “He enjoys them more than I do because I’m mortified with myself.”

David Schwimmer had not watched the show in 17 years

He said he only started re-watching it recently when his daughter started watching over the past year.

– Different endings were discussed for Ross and Rachel.

Co-creator David Crane said there was “some discussion” in the writers’ room about whether they really wanted Ross and Rachel to get together at the end of the show.

He said: “We discussed perhaps ambivalent endings where it seems like down the road…but we went ‘No, this is Friends, people have been waiting 10 years to see this couple get together, we have to got give them what they want.

“We just have to find a way so that the journey is unexpected.”

Friends: The Reunion is streaming now on NOW and will air on Sky One at 8pm on May 27.